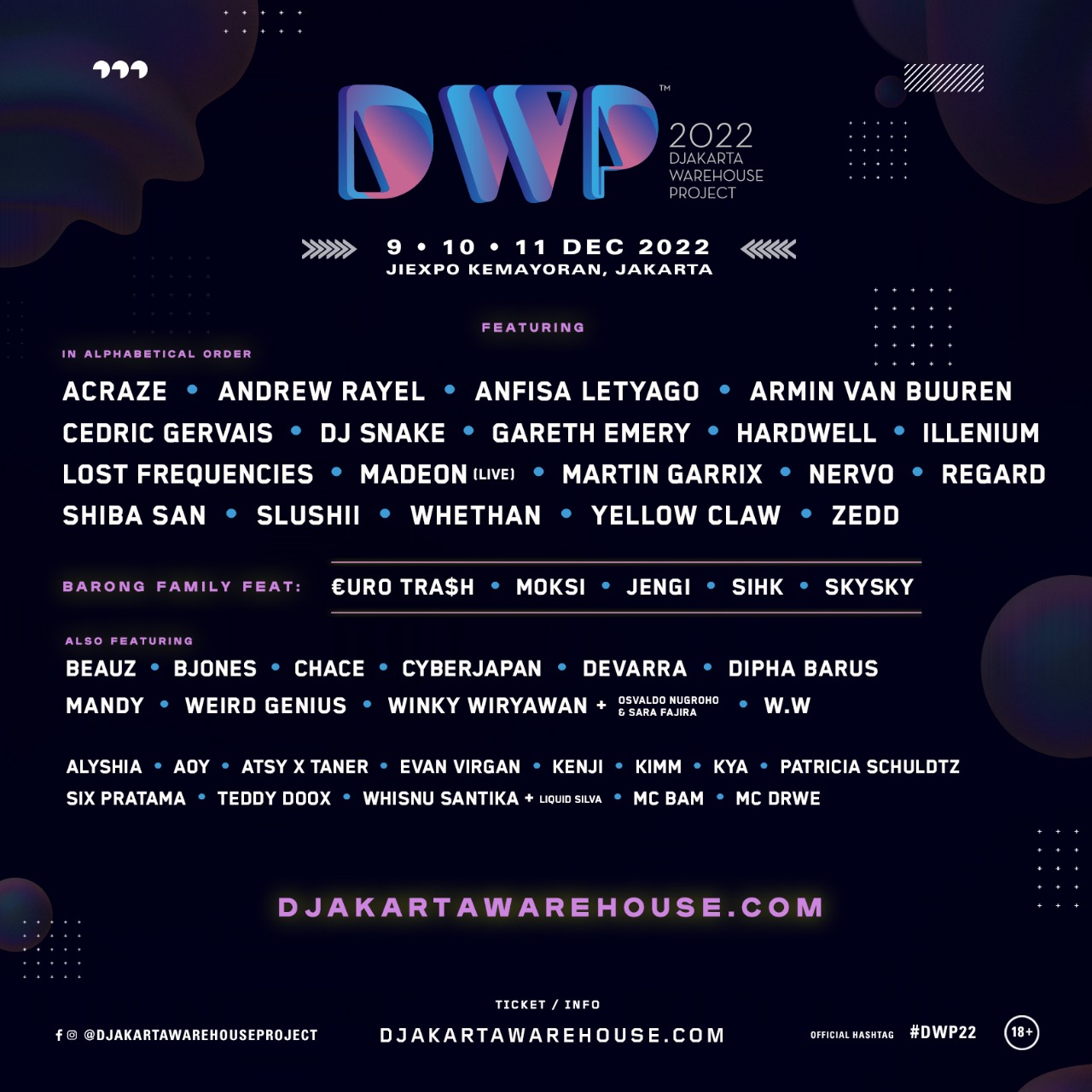 DWP IS BACK OFFLINE

After its last offline edition on 2019, one of the biggest music festivals in Asia, Djakarta Warehouse Project (DWP), will be back offline after two years of being held online, which will be held on 9, 10 & 11 December 2022 at JIEXPO Kemayoran, Jakarta.

In alphabetical order, Armin Van Buuren, DJ and Producer who has won the top position 5 times on the Top 100 DJs from DJ Mag, his name is also listed as one of the Grammy Award nominations for the album “This Is What It Feels Like” featuring Trevor Guthrie. In July, Armin Van Buuren also just released the song “One More Time,” featuring Maia Wright through his own music label, Armada Music.

Furthermore, enlivening the line-up, there is DJ Snake as a DJ, producer and DJ songwriter from France who has collaborated with various big names in the music world such as Justin Bieber, Megan Thee Stallion, Lisa “BLACKPINK”, and various other big global musicians.

After four-year hiatus from touring, Hardwell who is currently back on his “Rebels Never Die” world tour will also making an appearance at DWP 2022. Hardwell is currently preparing to release his album, and has been releasing singles, “I Feel like dancing” which was just released on August 12, 2022 and is track number 12 on the album chart.

The other five big names announced were Illenium, an American musician, DJ and producer, who is included in the “Forbes 30 under 30” music list and has received a Grammy nomination for his fourth album “Fallen Ambers” as best dance/electronic album. Madeon, a French DJ and producer, which his second album “Good Faith” was also nominated for a Grammy Award. In addition, Madeon has also assisted in the production of a number of songs by global artists, such as Lady Gaga and Coldplay. Martin Garrix, as one of the youngest and most successful DJs in the realm of pop and electronic music where one of the songs he wrote and produced with Avicii reached 1 billion listeners on Spotify. Yellow Claw, a DJ Duo from the Netherlands who has collaborated with many Indonesian musicians such as Weird Genius and Ramengvrl and has the biggest listeners in Jakarta, and Zedd, a multi-platinum DJ and producer who has won a Grammy Award and received several nominations and has various hit singles such as “The Middle” which has been listened to by more than 1 billion listeners.

“In order to celebrate the spirit of the return of Djakarta Warehouse Project 2022, after two years of being held online, DWP22 will bring together a spectacular world-class DJ and musician from various diverse genres and will bring a variety of experiences that electronic dance music and music lovers have been waiting for. so that we can all celebrate the joy of Djakarta Warehouse Project together again,” said David Ferdian as Director of Ismaya Live.